Update Required To play this audio file you will need to either update your browser to a recent version or update your Flash plugin. 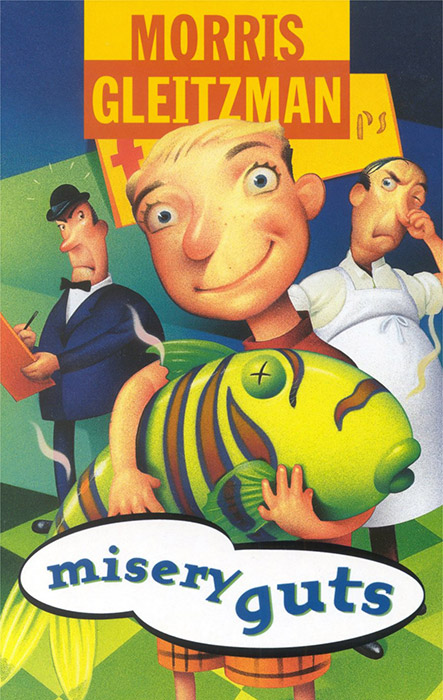 Calm down, he thought. You’re not robbing a bank. You’re not kidnapping anybody. You’re just painting a fish and chip shop orange.

He looked up and down his street, peering into the early morning fog.

Everything was grey. Grey houses. Grey shops. Grey cars. Grey blocks of flats looming up into a grey sky.

The cold air was making his ears hurt.

This is why, he thought. This is why Mum and Dad are such misery guts. The weather.

He pulled his collar up round his ears. Thirty-five years of it was enough to give anyone a long face. He’d only had twelve and a quarter years of it and even he got the willies sometimes.

Oh well, he thought, they’ll be feeling better soon. When they see what I’ve done.

He looked at his watch. Seven-fifteen, Mum’ll be awake soon. Dad’ll be back from the market at eight.

And neither of them’s got a clue they’re about to be cheered up.

Keith grinned at the thought.

Then he turned back to the shop front, dipped his brush into the tin and carried on painting.

The Tropical Mango Hi-Gloss spread over the dull brown of the window frame like liquid sunshine.

Kelth’s heart pounded even faster. It looked even better than he’d thought it would.

While he painted, he imagined Mum and Dad’s faces when they saw it. The big grins spreading over both their faces. Those big droopy creases at the corners of Dad’s mouth, gone. Those frown lines on Mum’s forehead, vanished.

He stood on a soft drink crate to reach the top bit of the window frame, brushing the Tropical Mango on as thickly as he could so not much of the brown showed through. When they see this, thought Keith, they’ll think the sun’s come out.

Then he heard the sound of a door slamming. He looked round. It wasn’t the sun coming out, it was Mr Naylor from next door.

Mr Naylor looked at the paint, at the brush, and at the Tropical Mango window frame.

‘What are you doing?’ he asked suspiciously.

Teaching sheep to juggle toasters, thought Keith, then remembered he’d promised Mum he wouldn’t be cheeky to Mr Naylor now he was twelve.

‘Painting our shop. For Dad’s birthday. It’s a surprise.

‘Won’t dry in this weather, he said.

‘It’s quick-drying,’ said Keith. ‘You get a brilliant long-lasting finish in only hours. Says so on the tin.’

‘The man in the shop said orange reminds people of their summer holidays,’ said Keith.

‘it’s dripping on the pavement,’ said Mr Naylor and shuffled away towards the bus stop.

He looked at the pavement. There were a few orange spots. He rubbed them with his foot, but they were already starting to go like old custard skin. Oh well, he thought, what’s a bit of spotty pavement when you’re bringing happiness to two people?

He moved on to the door. It was good to have a decent-sized flat bit to work on. He’d gone a bit wonky on the window frame in places.

He smoothed big brushfuls of paint on and had a vision of Mum and Dad, big grins still on their faces, going over to Lewisham and buying themselves some colourful clothes and coming back and having a party for Dad’s birthday. Just the three of them. Getting out all their old records, the Rolling Stones and stuff. Mum and Dad dancing. He’d never seen them dance.

The shop door glowed and so did Keith.

A hand reached past him and stuck a rolled-up newspaper in the letter box.

‘Waste of time, that.’ Keith sighed.

Mitch Wilson stepped round him and stuffed a paper into Mr Naylor’s letter box.

‘Be filthy dirty in a week.’

‘Comes up like new with a simple wipe,’ said Keith. ‘Says so on telly.’

Tragic, he thought, watching Mitch trying to stuff a wad of magazines through the door of the hairdressers two doors down. Only ten and he was as big a moaner as Mrs Wall in the laundrette. She didn’t even like people getting married in case the tablecloths from the reception put a strain on her dryers.

‘Be filthy dirty again in another week.’

Keith didn’t bother answering. No point with a moaner. And only two years ago Mitch Wilson had been an eager little kid who’d wanted to be a Mars Bar salesman.

Keith put the soft drink crate on top of the dustbin and climbed up to do the sign over the window. Vin’s Fish Supplies. He decided to do the background rather than the lettering. Do the lettering in Rainforest Green later.

As he slapped the paint on he wondered if there was an award for the Brightest Fish And Chip Shop In Britain. That’d really get Dad’s eyes sparkling again. Princess Di dropping in to shake his hand and give him a solid silver cod fillet.

This thought was shattered by a whine.

The whine was coming from the milk truck but Owen soon started one of his own.

‘That’s not a colour I’d have chosen, Keith. Show the dirt something awful, bright colours. Won’t dry this time of year neither, gloss paint. Wife’s cousin did their garage in November, still tacky in March. Tell your Mum no yoghurt till Thursday.’

Owen’s whine stopped, the truck’s started and he was gone.

No wonder Mum and Dad are depressed, thought Keith, with a milkman like that.

He finished off the sign and climbed down to get the full effect.

On the pavement he tried to imagine he was a depressed parent. He looked up at the glowing Tropical Mango and felt cheered up immediately. Then he half-closed his eyes and banged himself on the head with his knuckles to see what it would look like with temporary bad eyesight due to a tension headache.

‘Keith, what are you doing out here?’ Keith opened his eyes. Mum was standing next to him in her dressing gown, staring at the Tropical Mango. She stared at it for quite a long time. The frown lines on her forehead looked deeper than ever.

Keith, heart pounding, waited for her to be cheered up.

Instead she stared at him.

‘It’s a birthday surprise for Dad, he explained. ‘And you.’

He wished she’d stop staring at him.

‘Even though it’s not your birthday,’ he added.

She stared back at the paint.

She closed her eyes and held them closed for ages.

Must be the paint fumes, he thought. Funny though, they didn’t sting my eyes.

She looked at him again.

‘Where did you get the paint?’

‘Sally Prescott gave me eleven quid for my stamp collection.’

She breathed out slowly and her face softened a bit.

But she still didn’t smile.

‘Keith,’ she said, ‘I don’t think you should be around when Dad gets back.’

Keith was confused. Surely she wasn’t planning to pinch the birthday surprise? Pretend it was from her? Not Mum. Not the woman who’d sat up with him all night after he’d seen Nightmare On Elm Street.

Before he could tell her he’d go fifty-fifty and that was his final offer, Dad came round the corner in the van and pulled up in front of the shop.

‘Happy birthday Dad. From me and Mum.’ Dad sat behind the wheel, motionless, staring up at the shop, mouth open.

Keith opened the van door in case the surprise had sapped Dad’s strength.

Alright Mum, thought Keith, don’t overdo it, I think he’s got the message.

He waited for Dad to take it all in. For Dad’s face to light up with the sheer joy of the Tropical Mango Hi-Gloss. And then for him to throw back his head and roar with delighted laughter.

Or even just give a big grin, like he did in that photo when he won Best Fish And Chips at the Woolwich Show before Keith was born.

Keith realised Dad was staring down at the pavement.

Then he looked at Keith with an expression that made Mr Naylor, Mitch Wilson and Owen the milkman look like the happiest people on earth.

Misery Guts is available in bookshops and libraries in Australia and New Zealand and elsewhere, and online:

The audio track on this page is an excerpt from the Bolinda Audiobook Misery Guts, read by Morris Gleitzman. Buy it online: